New York City is definitely one of the most desired tourists’ destinations on Earth! Also known as Big Apple, this beautiful city can steal your heart forever as well as make you wanna run out of there as soon as possible. We have visited New York twice and spent over 4 months there in total. And yet do we dream about coming back! Isn’t it a good reason to check out our New York City guide before going to this City of Big Dreams?

This article will help you to figure out how to get to the city from the airport, how to navigate and what to see in NYC, what to eat and where to stay in New York, as well as what souvenirs to bring back.

Head directly to the important part if you don’t want to read all the guide (don’t tell me, I will be mad!!):

What to know before going to New York City

You should understand one thing: NYC is a real city jungle. And no matter how well you are prepared, you will still face some unexpected moments. We will try to explain the most common things to make the first few days in the Big Apple not that challenging.

New York consists of five regions: Manhattan, Brooklyn, Queens, Bronx and Staten Island. If you’re here only for 1-2 weeks, you will probably only see the first one (big enough to never get bored). Though some determinant Russians also visit the famous Brighton Beach – Russian community in Brooklyn (as if there weren’t enough Russians back in the home country).

NYC citizens speak over 800 languages. Of course, at least basic English language would be helpful, but you still have good chances to meet someone who understands your language.

Though New York City Pass sounds really attractive (only $122 for 6 main sights – you save 42%!), you don’t need it. And here is why: both American Museum of Natural History and The Metropolitan Museum of Art are free to enter (donations are appreciated!), so as 9/11 Memorial (you still have to pay for the Museum, but it also has its free day). There is also the Statue of Liberty (free to see from the Staten Island Ferry, if you are not aiming to hug it). And what is left? Top of The Rock ($34) and The Empire State Building ($34 or $54) observation desks… Told ya! 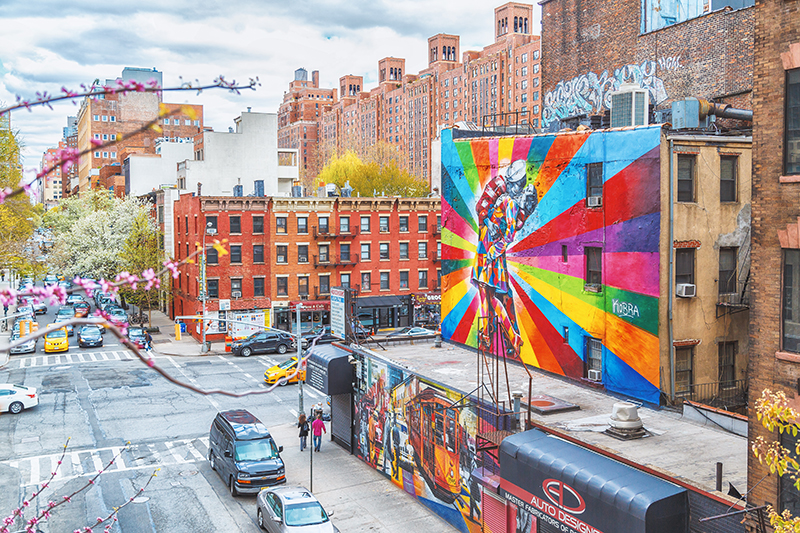 Mind the American power sockets! They look like a freaking out face:) You will need power adapter to 110 Volts and 60 cycles to match that face expression.

In case of emergency call 911 (that is not a movie trick, but an actual line).

Official drinking age in NYC is 21. Restaurants are very strict with that and carefully check your ID. Stores do not sell alcohol to youngsters as well. You also can’t buy cigarettes if you’re under the legal age (they are so expensive, you’ll probably wouldn’t even want to try!).

NYC is huge. Not surprisingly it has several international airports: JFK, Newark and LaGuardia. We were lucky to always arrive and depart from JFK, so don’t feel weird or lost there anymore.

JFK offers 30-minutes free Wi-Fi. Not too much, but pretty enough to double-check your hotel’s address or make a reservation if you’re a last-minute person (highly NOT recommended in the Big Apple, welcoming millions and millions of tourists!). 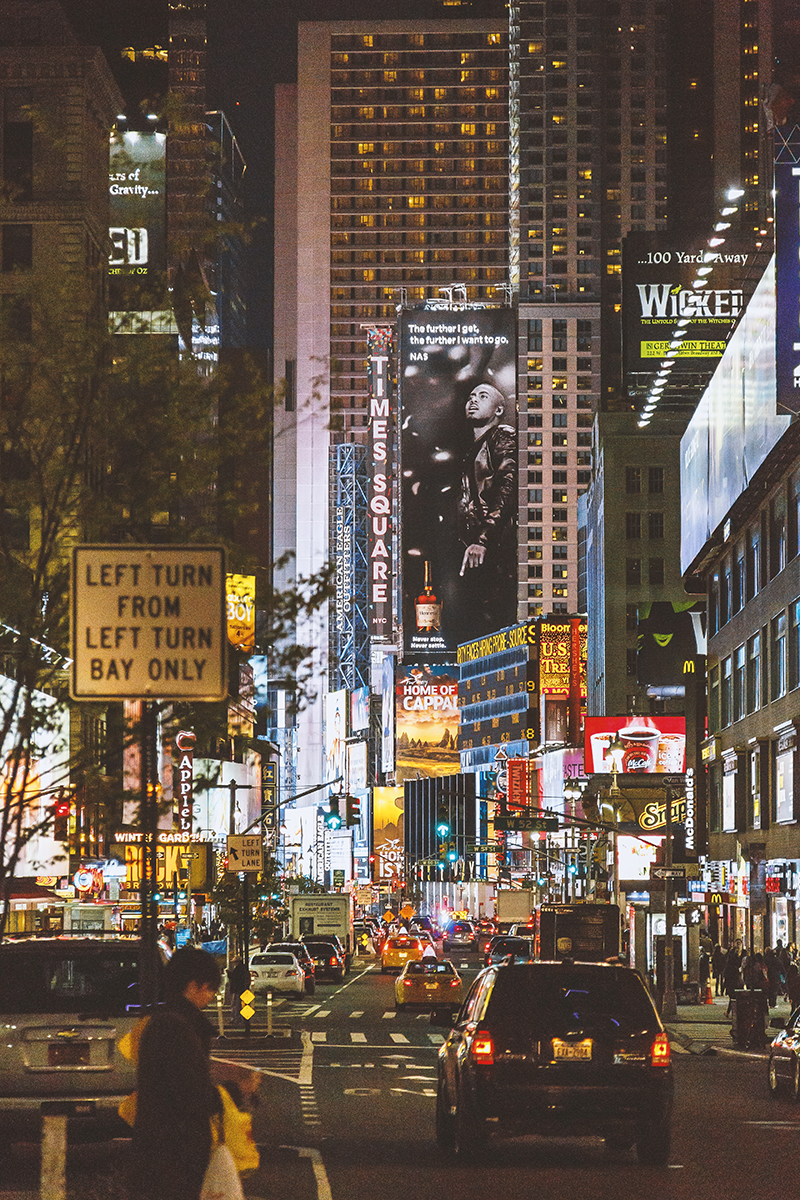 It goes without saying, you will also easily find ATM machines all over the airport, so don’t worry about not having cash in advance. Though if you already have some cash, but not dollars (who knows?), Currency Exchange points are at the terminals 1, 4, 7 and 8.

John F. Kennedy airport is located in Queens, 25 km away from the Times Square. Don’t be fooled by the numbers – it IS far! All the way from the airport to the city centre takes about 1.5 hours. So getting to Manhattan is probably the first tricky thing you’re facing when coming to the Big Apple.

The cheapest way to get to the city centre is by taking AirTrain to Jamaica Subway Station first and transferring to one of the many lines approaching Times Square (or nearest stations) next. AirTrain connects all the six terminals of the airport and is free if traveling within the airport. But if you’re transferring to the subway, the exit will cost you $5, add another $3.00 for a single subway ride to the hotel. And that’s it! Compare to the minimum of $65 for a taxi ride – trust me, you will thank us for those $60 you already saved! Just in case you decide to take a taxi after all, there are heaps of them right outside the Arrivals. 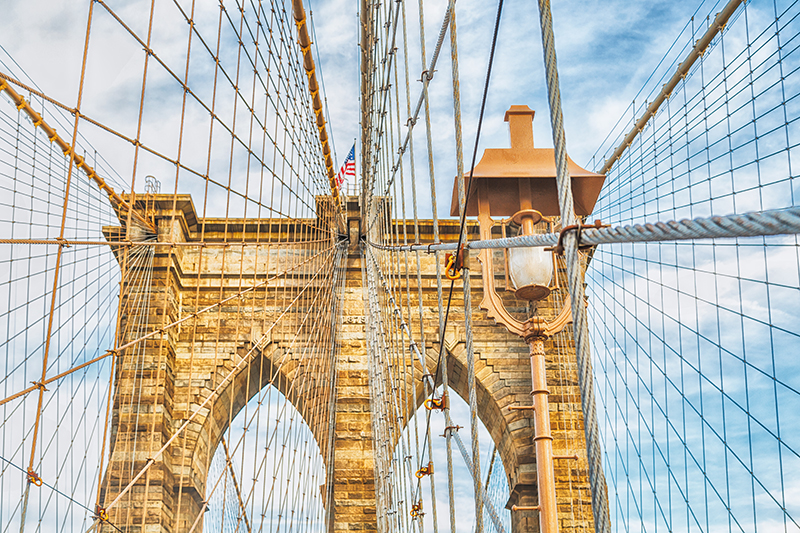 How to not get lost in New York City

Navigating in the Big Apple might look like a nightmare, but it is not that difficult at the end of the day, especially if you’re not going further than Manhattan (and you probably won’t leave the island too often as a tourist).

Manhattan is actually just a grid of numbered streets and avenues. 5th avenue divides the island into two halves with the West streets on the left and the East streets on the right. Downtown Manhattan and the indirect Broadway might add a mess, but at least you know Broadway is the longest avenue going North-South and will bring you to the needed destination sooner or later.

New York City is huge. With its 789 square km it is bigger than Singapore! Definitely not an option to walk from one sight to another. You’d better forget about the car as well – annoying traffic won’t allow you to enjoy a holiday. Public transportation is really the best choice! It is perfectly organised and is used by 54% of citizens on a daily basis (always trust a local while traveling!). 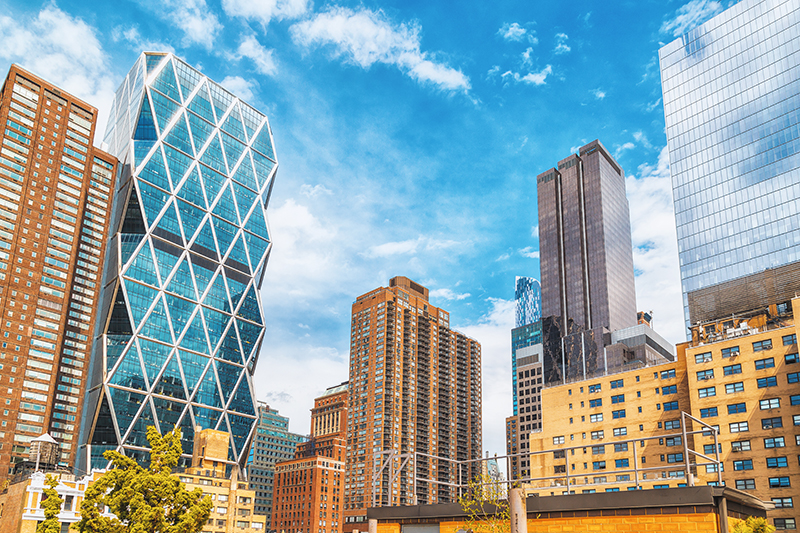 Though there are always a lot of buses running around NYC, we prefer subway. You might have heard lots of scary stories about how complicated local subway is. Well, makes sense when talking about the largest underground system in the world with its 500 stations! But everything is not that bad after all.

Here is everything you need to know about the NYC Subway. 1) There are two types of trains: local stops on every stop and express was made to transfer you from one part of the city to another as fast as possible. Make sure your destination is included! 2) Colours of the lines refer ONLY to the avenues along which the line runs, it is NOT an actual route. Pay attention to numbers or letters on a coloured circles at the front of the train, not the circles themselves. 3) Within Manhattan trains travel either UPTOWN or DOWNTOWN and the platform most often would be splited by the rails. Double-check the direction on the signs at the station to make sure you’re on the right side.

Oh yes, single ride costs $3 and the unlimited 7-Days pass is $32. Both cover bus rides and two-hours transfer (subway to bus, for example). 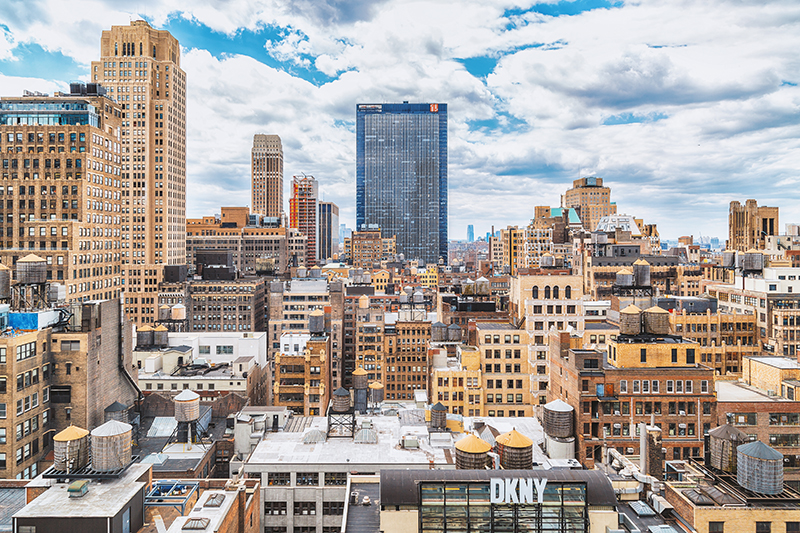 Where to stay in New York City

We had an opportunity to stay both in hotels and private apartments. In case with NYC, we would definitely recommend the second option. While Manhattan hotels are really pricey (the cheapest option was $100 per night and the room was TINY!), Airbnb offers thousands of affordable and cool places. For a short-term trip stick to the central streets. For example, we stayed on the Western side, between Times Square and Central Park. The street was quiet and the views from the rooftop we had an access to definitely added to the value of this accommodation!

On the other hand, there are that obvious advantages of staying at the hotel: delicious breakfast you don’t have to cook, special rates for the main attractions, helpful reception desk, that wakes you up in time and orders taxi.

To make tough choice a little less complicated, we selected several amazing and not too expensive hotels as well as a couple of apartments that are currently waiting for guests.

Of course, there is always something to discover in New York no matter how many times you have already visited this city. But here is my personal top of things to do and see (listed randomly):

Where to eat in New York City

Gone are the times when Shake Shack was on every tourist’s must-try list. Nowadays you can enjoy burgers and fries from the famous fast-food chain without leaving Moscow. Though it doesn’t mean there is a tiny little bit less glory in what New York City has to offer for all the foodies out there.

We definitely didn’t dedicate enough time and efforts to explore local restaurants, but still here are some recommendations. 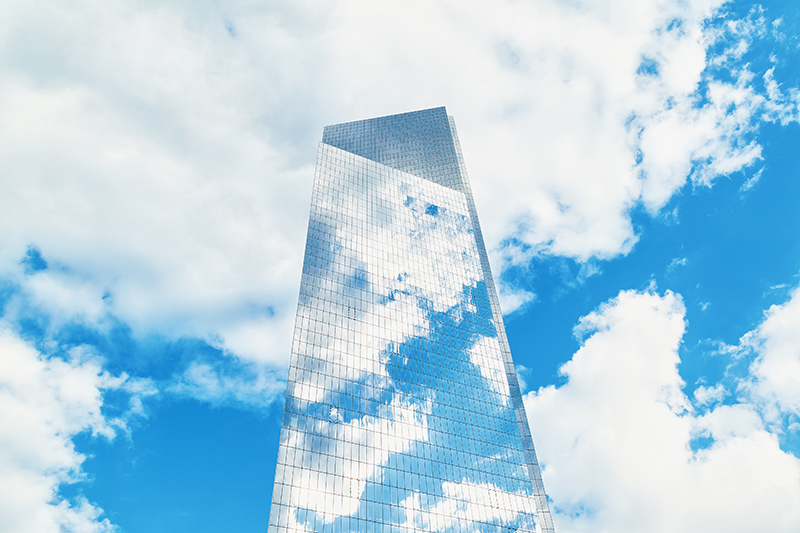 What to bring from New York City 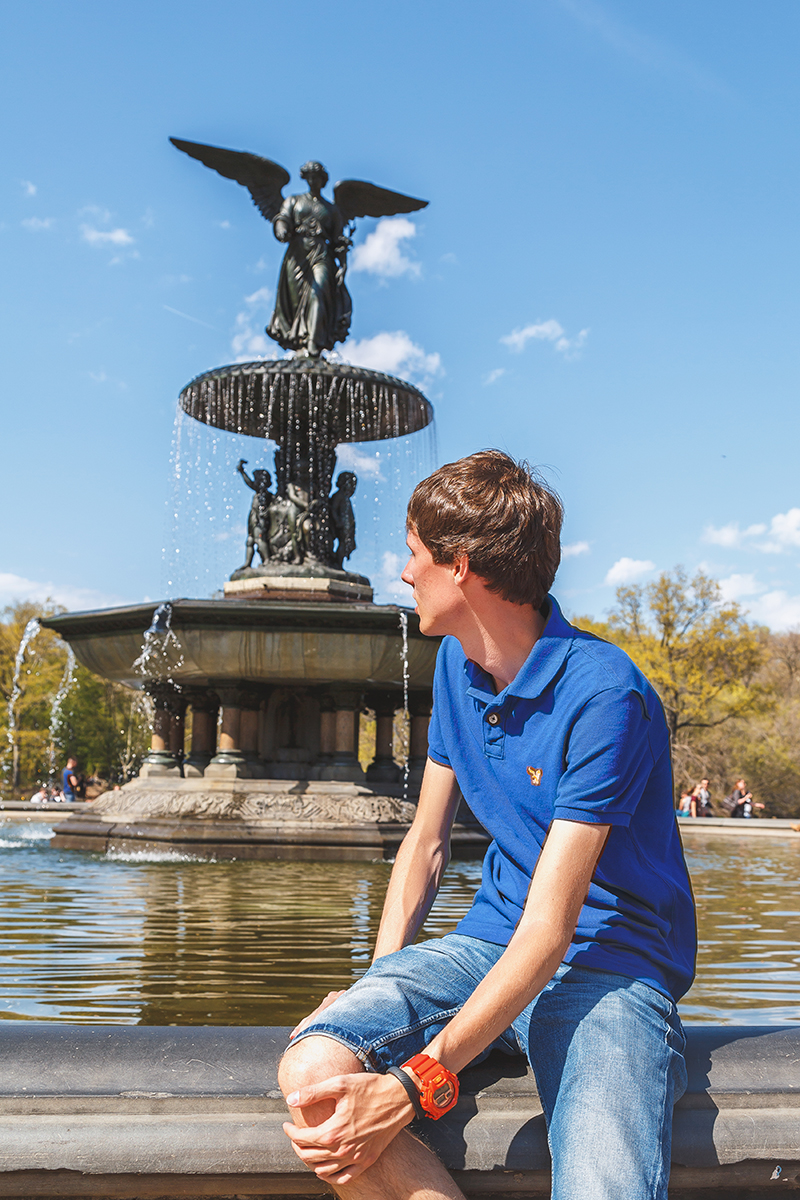 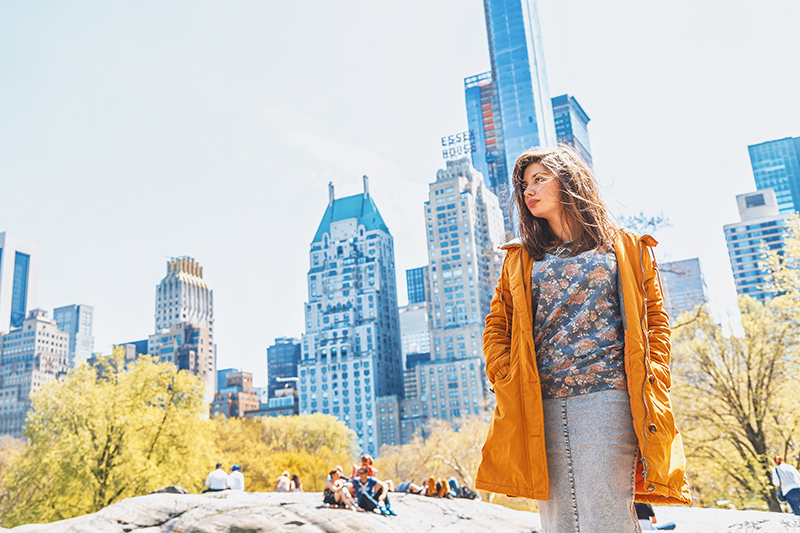 A power of complaint

How to Prepare Your Smartphone to be Your...

Tips to Increase Traffic on your Blog